© Kyle Jantzen, 2009-2018. Unauthorized use and/or duplication of this material without express and written permission from this blog’s author is strictly prohibited. Excerpts and links may be used, provided that full and clear credit is given to Kyle Jantzen or “kyletjantzen.wordpress.com” with appropriate and specific direction to the original content.

I am a professor of history, specializing in the history of church and state in Nazi Germany. I also research on Christian responses to the Holocaust, and the relationship between memory and place.

I teach a wide variety of courses at Ambrose University, including World History, Modern Revolutions, History of Genocide and Mass Violence, History at the Movies, The Protestant Reformation, History of the World Wars, Applied Research in History, and Nazi Germany.

Last but certainly not least, I am married to Colleen and have four great kids: Liz (married to Jason, with Lily and baby Summer), Matt (married to Michaela), Sarah (married to Grant, with baby Margot), and John (engaged to Brenna).

I’m not sure when I first became interested in history. Perhaps it was when my junior high teacher drew a diagram of Hadrian’s Wall on the chalkboard, then play-acted Roman soldiers sword-fighting. Maybe it was when my parents took me to see the film The Hiding Place, the story of how Corrie Ten Boom and her Dutch family rescued Jews during the Holocaust. And it might have been when I read Robert K. Massie’s massive biographies of Peter the Great and other Russian tsars during my high school years. At any rate, after a year at Bodenseehof (Capernwray Bible Institute in Friedrichshafen, West Germany), I ended up at the University of Saskatchewan, where I completed a BA (high honours) in History.

I remained in Saskatoon to study for an MA degree in History under Dr. Peter Bietenholz, an eminent Erasmus scholar whose seminar courses I had enjoyed immensely. (Dr. Bietenholz held several of his courses in his charming old home, where a handful of us would sit among his five-hundred-year-old books, drink coffee, eat cookies, and read Dante or Erasmus!)

My MA thesis (Guilds and Reformation: Basel in the 1520s) was a social history of the Reformation in the Swiss city of Basel, in which I examined the relationship between the religious and political aspects of that reform. It traced events from the infiltration of Lutheran ideas into local monasteries and churches before 1520 to the heated and sometimes violent debates about religion and politics throughout the 1520s, culminating in the eventual victory (at cannon point!) of the Reformation in Basel in early 1529.

Along the way, I began to grow interested in the “German Church Struggle,” the conflict within the German churches and between the churches and the National Socialist Party and state, during the time of Hitler’s Third Reich. As a result, I completed a PhD in History at McGill University in Montreal, under the guidance of Dr. Peter Hoffmann, FRSC, a leading authority on the German Resistance to Hitler. In my dissertation, I examined the relationship between religion and nationalism in National Socialist Germany “from the bottom up,” analyzing the upheaval in numerous parish churches through the eyes of pastors and parishioners in three different regions of Hitler`s Germany. Eventually, that grew into my first book: Faith and Fatherland: Parish Politics in Hitler’s Germany (Minneapolis: Fortress Press, 2008).

At Ambrose, one of my favourite (though difficult) courses to teach is the History of Genocide and Mass Violence. After some theoretical work on genocide and the perpetration of evil, we examine the Holocaust, the Canadian Residential School experience, and Rwanda in the 1990s, working to understand how and why these events unfolded the way they did. I’m convinced that when we study those events, the students and I also learn more about the ways in which political extremism operates in our world today, through propaganda, violations of the rule of law, racist violence, the violation of human rights, and even so-called “ethnic cleansing.” In the History of Genocide and Mass Violence, Modern Revolutions, or Nazi Germany, there’s more to studying history than just explaining the past–we also want to become compassionate, principled, responsive advocates for justice in our world today.

For more on how I became a historian and how that connects with my faith, read this chapel talk  I gave in 2011, when I was promoted to full professor at Ambrose.

Outside of academics, I watch sports of all kinds (English and European soccer top the list), listen to all kinds of music (from U2 to ambient/electronic to praise and worship to 80s pop…), fumble on the bass guitar, bake lots of bread, garden and hike with my wife, and (back when we could travel, before the pandemic!) lead Reformation tours in Europe (see Tour Guiding for History Travel).

I teach the following courses, many of them in a two-year rotation:

Religion and Nationalism in Nazi Germany

I’ve been researching and writing about religion and nationalism in Nazi Germany for well over twenty years now. I first entered the field by reading about leaders in the Confessing Church, men like Martin Niemöller, Karl Barth, and Dietrich Bonhoeffer, who opposed the campaign to nazify the German Protestant churches. Along the way, I began to analyze the German Church Struggle from the perspective of local history (or what historians call Alltagsgeschichte, the history of everyday life). I investigated the goings on in parishes in three regions of Nazi Germany (Brandenburg, Saxony, and Württemberg), focusing on topics like pastors and German nationalism, parish life under National Socialism, pastoral appointments (a key battleground between the pro-Nazi Protestants and those who wanted to keep the churches out of politics), church responses to Nazi racial policy, and the ins and outs of local church politics during the time of the Third Reich. All this is now published in my book: Faith and Fatherland: Parish Politics in Hitler’s Germany (Minneapolis: Fortress Press, 2008). You can see what other scholars have said about it at the Association of Contemporary Church Historians or at H-German (part of H-Net, the Humanities and Social Sciences Online).

I continue to work away at various projects in this field. In 2015, I published an article on a Berlin church building filled with Nazi symbolism, called “Church-Building in Hitler’s Germany: Berlin’s Martin-Luther-Gedächtniskirche as a Reflection of Church-State Relations.” Kirchliche Zeitgeschichte 27 no. 2 (2014): 324-348. It can be read here.

I have other articles on the history of Christianity in Nazi German in process–one on an ambitious pastor in Berlin who started a Protestant-Nazi organization and another on German Protestant reactions to the work of Nazi ideologue Alfred Rosenberg. See my Publications page for more details.

Christian Responses to the Holocaust 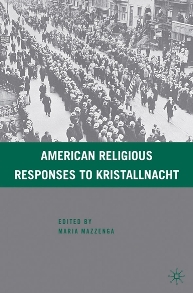 Over time, I began to wonder not only about the Christian responses to Nazism and the Holocaust in Germany, but also in North America. In 2007, I got the opportunity to begin a research project on this question when I was invited to join a group of scholars from the United States and Britain for a two-week summer research workshop on “American Religious Responses to Kristallnacht,” hosted by the Center for Advanced Holocaust Studies at the United States Holocaust Memorial Museum. We were considering the way that Jews, Catholics, and Protestants all reacted to the terrible antisemitic pogrom of November 1938, when synagogues throughout Germany were burnt down, Jewish shop-windows were smashed, Jewish homes were invaded, and roughly 30,000 Jewish men were rounded up and placed in concentration camps. Out of that workshop, I published a chapter (“‘The Fatherhood of God and the Brotherhood of Man’: Mainline American Protestants and the Kristallnacht Pogrom”) in American Religious Responses to Kristallnacht (New York: Palgrave Macmillan, 2009).

Later, I co-wrote a conference paper with former student Jonathan Durance, called “‘Our Jewish Brethren’: Christian Responses to Kristallnacht in Canadian Mass Media,” for the 40th Annual Scholars’ Conference on the Holocaust and the Churches at St. Joseph’s University, Philadelphia, in 2010. That article was published in a special issue of The Journal of Ecumenical Studies in fall 2011, and can be read here.

After a 2017 conference hosted by the Leo Baeck Institute in Jerusalem on the past 500 years of relations between Jews and Protestants, I published a chapter analysis the complicated and conflicting responses of American clergy to the Nazi persecution of the Jews. It is called “Nazi Racism, American Anti-Semitism, and Christian Duty: U.S. Mainline Protestant Responses to the Jewish Refugee Crisis of 1938.” In Jews and Protestants: From the Reformation to the Present, edited by Irene Aue-Ben-David, Aya Elyada, Moshe Sluhovsky, and Christian Wiese, 203-227. Berlin: De Gruyter, 2020. The chapter can be read here.

In 2019, I co-wrote a conference paper with a senior undergraduate student, Emalee Lane, for the Canadian Society of Church History annual meeting, on the topic of the attitudes of the Christian and Missionary Alliance Church (as seen in The Alliance Weekly) to the persecution of Jews in Nazi Germany. It was called “‘Keep your eyes upon the Jew!’: Jews and Nazis in the Context of Christian and Missionary Alliance Eschatology.” Historical Papers: Canadian Society of Church History (2019): 105-120.

For over five years now, I have been working with undergraduate students on applied research projects. The results of our work–on the relationship between memory and place in High River, AB, and on the stories of German immigrants to Western Canada from 1947-1960–can be seen on our public history site, publichistory.ambrose.edu.

I am always on the hunt for news ways to teach undergraduate history. In 2016, I published an article on one pedagogical technique I’ve developed and used (I think) successfully. It’s called “Teaching the Practice of History with the New York Times.” The History Teacher 49 no. 2 (February 2016): 271-184. It can be read here.

In 2015, I was asked to outline the recent history of the relationship between church and state in Canada, and chose to think about that through the lens of Supreme Court decisions. The resulting article is called “The Changing Place of Religion in Canada.” Religion – Staat – Gesellschaft. Zeitschrift für Glaubensformen und Weltanschauungen/ Journal for the Study of Beliefs and Worldviews. 15, no. 1-2 (2014): 85-103. You can read this article here.

For more details, please consult my curriculum vitae or read some of my publications.