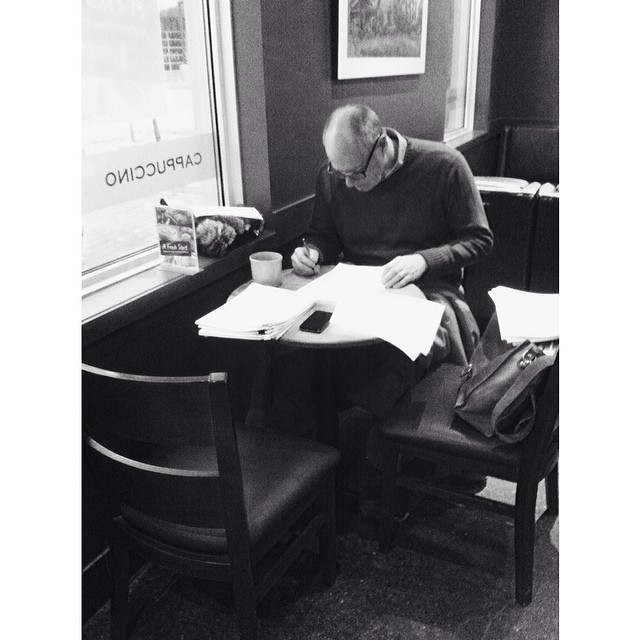 © Kyle Jantzen, 2009-2018. Unauthorized use and/or duplication of this material without express and written permission from this blog’s author is strictly prohibited. Excerpts and links may be used, provided that full and clear credit is given to Kyle Jantzen or “kyletjantzen.wordpress.com” with appropriate and specific direction to the original content.

Refugees from Syria and other parts of the Middle East are no longer front page news. After a month or more of non-stop reporting, most of our media organizations have moved on to other stories, no doubt sensing a measure of compassion fatigue across the Western world.

Not that there aren’t plenty of tragic refugee stories out there. Brandon Stanton–he of the famous Humans of New York blog–recently travelled to Europe and the Middle East to capture the testimonies of those fleeing terror and violence in the region. Recently, he added some accounts from Iraqis fleeing their own version of chaos and calamity, like the family who received death threat text messages everyday, then woke up to find their house on fire or the government clerk who fled in the night, when he learned the militia was going to kill him. But Stanton has not only chronicled these stories of suffering. He has also given us stories of hope, of kindness, and of love expressed by Europeans who see the refugees as fellow humans in need.

And there are great initiatives out there. One of the newest is a Kickstarter campaign to donate about $1.225 million to enable the UN Refugee Agency to provide sleeping bags, food and fresh water, clothing, and education for 5,000 Syrian refugees. Around 18,000 people have contributed and the project is almost fully funded (as of October 7, 2015).

A few weeks ago, it was my turn to share a devotional at our church board meeting. I had been reading and thinking a lot about the refugee crisis, and was wanting to understand the problem not only politically but also theologically. In preparation for the devotional, then, I began to think about where Scripture might speak to this issue. Soon I remembered the Old Testament texts like Exodus 23, in which God, after giving Moses the Ten Commandments, instructs him to issue a whole series of laws to God’s people. Tucked in the middle of these commandments are the following words, from verse 9*: “Do not oppress a foreigner; you yourselves know how it feels to be foreigners, because you were foreigners in Egypt.” This is not simply a command, but an appeal to a common human experience–the feeling of being the outsider–as the basis for justice.

This idea is repeated, and strengthened, in Deuteronomy 10. There–once again in the context of the giving of the law to the Children of Israel–the writer calls on God’s people “to fear the Lord your God, to walk in obedience to him, to love him, to serve the Lord your God with all your heart and with all your soul” (vs. 12), and to obey all God’s commands. What I find interesting about this passage is the way in which the command to care for the foreigner (and other vulnerable people, to be sure) is expressed more positively (love the foreigner!) and placed in the midst of a text which exalts God. Put bluntly, one of the attributes which makes God so great and so awesome, is that he defends and cares for the fatherless, the widow, and the foreigner! Here is more of the passage:

Deuteronomy 10: 17-21
17 For the Lord your God is God of gods and Lord of lords, the great God, mighty and awesome, who shows no partiality and accepts no bribes. 18 He defends the cause of the fatherless and the widow, and loves the foreigner residing among you, giving them food and clothing. 19 And you are to love those who are foreigners, for you yourselves were foreigners in Egypt. 20 Fear the Lord your God and serve him. Hold fast to him and take your oaths in his name. 21 He is the one you praise; he is your God, who performed for you those great and awesome wonders you saw with your own eyes.

The implications of this text seem hard to evade. Would we not be imitators of our Lord God if we gave food and clothing to the foreigners residing among us? Should we not remember that we too were once foreigners? (Or at least, for many of us, our grandparents or great-grandparents, so many of whom immigrated to Canada and other Western countries with little but the clothes on their backs and the willingness to work.)

As I was reflecting on the scriptural messages concerning foreigners, my mind turned to the well-known story of the Good Samaritan in Luke chapter 10. This parable contains a variety of messages, but the thing that popped into my head was the extremely important and very controversial (in Jesus’ day) fact that the Samaritan was … a Samaritan. He was not a Jew, and should have had nothing to do with Jews, since Jews despised his people. No Jew would want to be helped by a Samaritan. Every Jew would have been scandalized to hear of Jews who were shown up by the kindness of the Samaritan. But there was the Samaritan anyways, quietly reaching out across the cultural divide. Here is the full story:

Luke 10:25-37
The Parable of the Good Samaritan
25 On one occasion an expert in the law stood up to test Jesus. “Teacher,” he asked, “what must I do to inherit eternal life?”
26 “What is written in the Law?” he replied. “How do you read it?”
27 He answered, “‘Love the Lord your God with all your heart and with all your soul and with all your strength and with all your mind’; and, ‘Love your neighbor as yourself.’”
28 “You have answered correctly,” Jesus replied. “Do this and you will live.”
29 But he wanted to justify himself, so he asked Jesus, “And who is my neighbor?”
30 In reply Jesus said: “A man was going down from Jerusalem to Jericho, when he was attacked by robbers. They stripped him of his clothes, beat him and went away, leaving him half dead. 31 A priest happened to be going down the same road, and when he saw the man, he passed by on the other side. 32 So too, a Levite, when he came to the place and saw him, passed by on the other side. 33 But a Samaritan, as he traveled, came where the man was; and when he saw him, he took pity on him. 34 He went to him and bandaged his wounds, pouring on oil and wine. Then he put the man on his own donkey, brought him to an inn and took care of him. 35 The next day he took out two denarii [about two days’ wages] and gave them to the innkeeper. ‘Look after him,’ he said, ‘and when I return, I will reimburse you for any extra expense you may have.’
36 “Which of these three do you think was a neighbor to the man who fell into the hands of robbers?”
37 The expert in the law replied, “The one who had mercy on him.”
Jesus told him, “Go and do likewise.”

As I read the parable, it was the verbs that jumped out at me.

The Samaritan came to where the man was. This is tricky for us. We live far from the vicinity of the refugee crisis. And yet, through the power of television and the Internet, through the sounds and images we hear and see, through our ability to experience their stories and effect change in their lives, we aren’t actually so far removed from the refugees.

The Samaritan saw him. I suppose at that moment he had a choice. Quickly look away and keep moving. Keep to his own schedule and his own affairs. But he stopped. He saw the helpless man.

He went to the man.

He bandaged his wounds.

He transported the man (giving up his own ride).

He paid for the man’s immediate needs.

He promised to continue to pay for his future needs without knowing the full extent of the cost.

The story of the Good Samaritan is power–so powerful that the phrase “Good Samaritan” remains in our cultural vocabulary long after we’ve forgotten its source. But as I read the story, I was struck most of all by the answer that the expert in the law gave to Jesus, when Jesus asked him: who was the neighbour to the man in need?

“The one who had mercy on him.”

This legal scholar understood the meaning of the parable. When the Samaritan reached across the cultural divide to care for the wounded, helpless Jew, he was demonstrating mercy.

Here too, the application seems simple enough: “Go and do likewise.”

Quit reading here if you like, but there was one more thought that came to me as I meditated on various scriptural texts relating to foreigners and aliens: some of these refugees might be dangerous. They might even be our enemies! Surely that’s worth considering.

Here too, though, the Bible calls us not to hatred and fear but to love and kindness:

Luke 6:27-36
Love for Enemies
27 “But to you who are listening I say: Love your enemies, do good to those who hate you, 28 bless those who curse you, pray for those who mistreat you. 29 If someone slaps you on one cheek, turn to them the other also. If someone takes your coat, do not withhold your shirt from them. 30 Give to everyone who asks you, and if anyone takes what belongs to you, do not demand it back. 31 Do to others as you would have them do to you.
32 “If you love those who love you, what credit is that to you? Even sinners love those who love them. 33 And if you do good to those who are good to you, what credit is that to you? Even sinners do that. 34 And if you lend to those from whom you expect repayment, what credit is that to you? Even sinners lend to sinners, expecting to be repaid in full. 35 But love your enemies, do good to them, and lend to them without expecting to get anything back. Then your reward will be great, and you will be children of the Most High, because he is kind to the ungrateful and wicked. 36 Be merciful, just as your Father is merciful.

These are some of the texts I’ve been thinking about lately, in connection to the ongoing and not-soon-over refugee crisis. They constitute a call for me and, I am convinced, for all God’s people. Of course there are many all around us who need mercy. But surely the refugees from Syria and other parts of the Middle East must be among them.

*  All texts taken from the New International Version, 2011.

One thought on “Loving Our (Refugee) Neighbours”

I am a professor of history, specializing in the history of church and state in Nazi Germany. I also research on Christian responses to the Holocaust and am interested in the wider subject of religion and nationalism. I serve as Dean of Arts & Science at Ambrose University in Calgary, Canada. I am also a Christian, and have long worshipped and served within The Alliance Canada (C&MA). I am married to Colleen and have four great kids--Liz (married to Jason), Matt (married to Michaela), Sarah (married to Grant), and John (soon married to Brenna)--and three lovely granddaughters: Lily, Summer, and Margot. Finally, I love to garden and to bake bread, both of which I have come to understand as spiritual acts of cultivation--small but real contributions to God's kingdom of flourishing, beauty, and community. View all posts by kjantzen